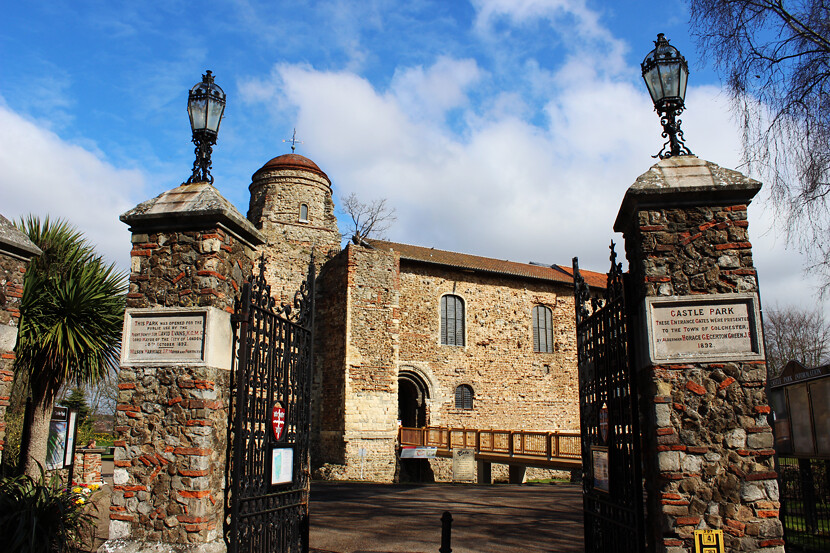 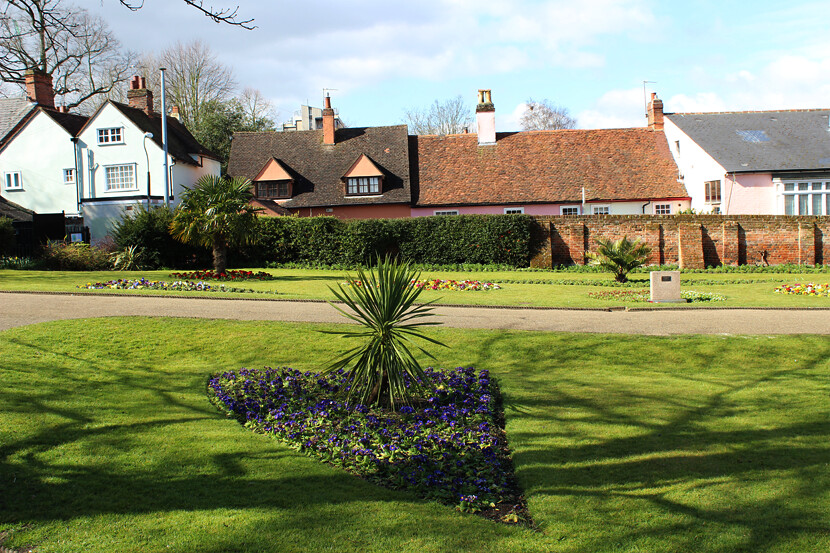 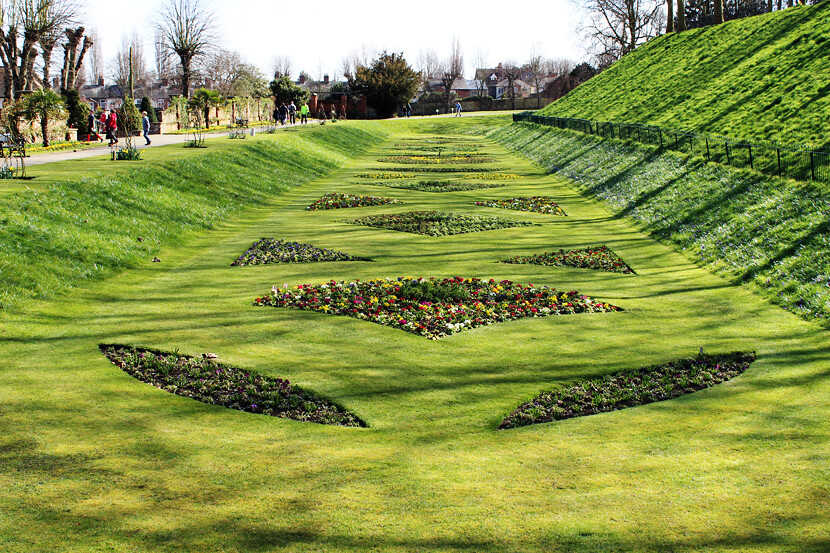 As you might have already read from this post, me and Jim visited the lovely little town of Colchester a few weeks ago. We only spent one night in the town, and while that wasn’t quite enough to see everything we wanted to, we did manage to cram in quite a lot.

One of the must see attractions in Colchester is definitely the Castle, which is conveniently situated right in the centre of the town. We didn’t go inside to the museum, but, as the sun was out, a walk on the grounds was more than enough – there’s lots of flowers, cute little houses and just lots of pretty greenery in general. And of course the castle itself is pretty easy on the eyes too! 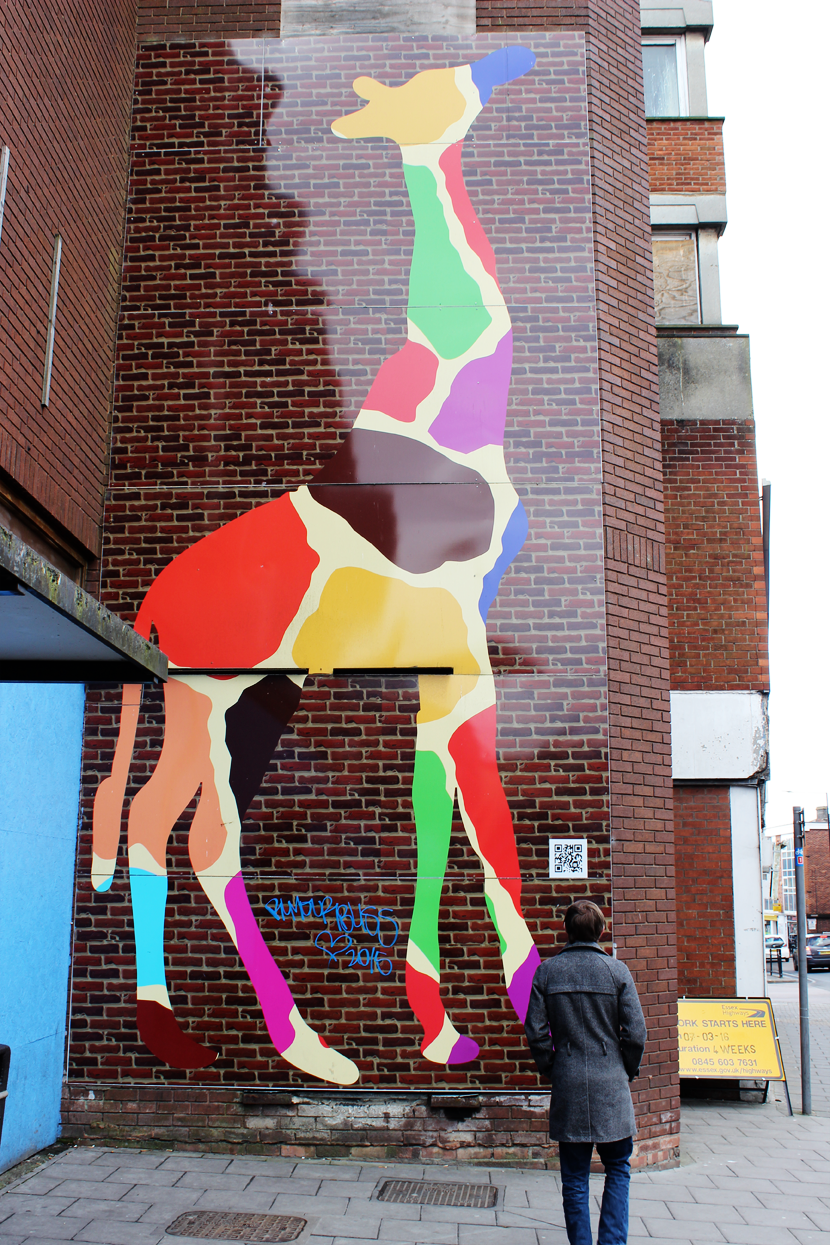 If you allow yourself to get a little bit lost you might bump into this fella too (the giraffe, not my boyfriend). 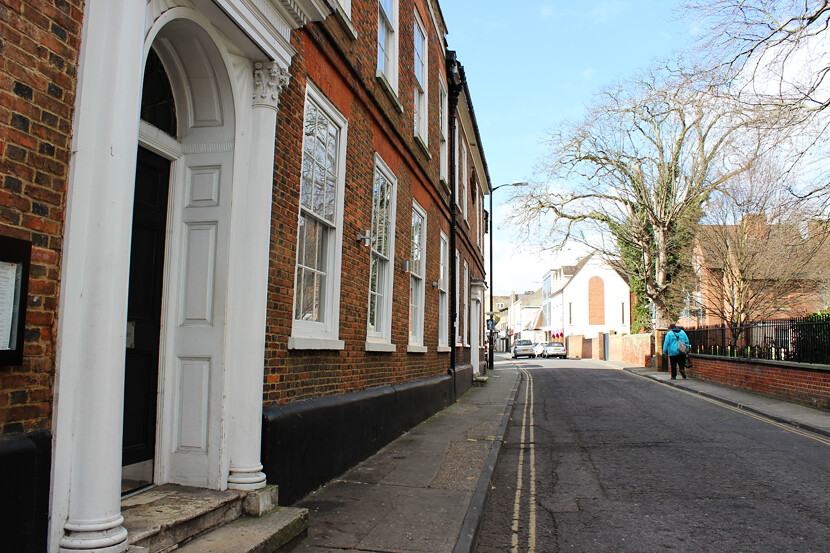 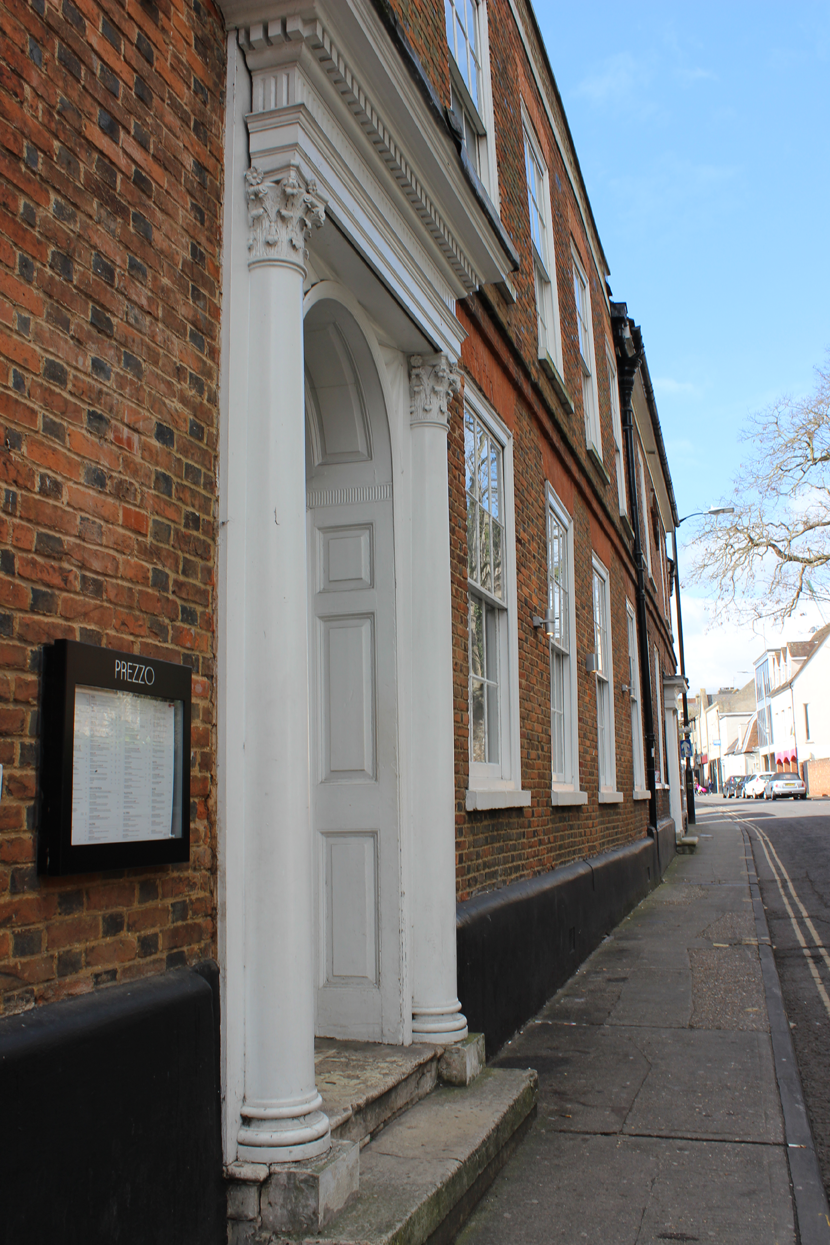 I don’t know why, but I fell in love with this house. Isn’t it beautiful? It just kind of reminds of something Jane Austen would have lived in when staying in a city rather than the country side. I might be completely off base here though… 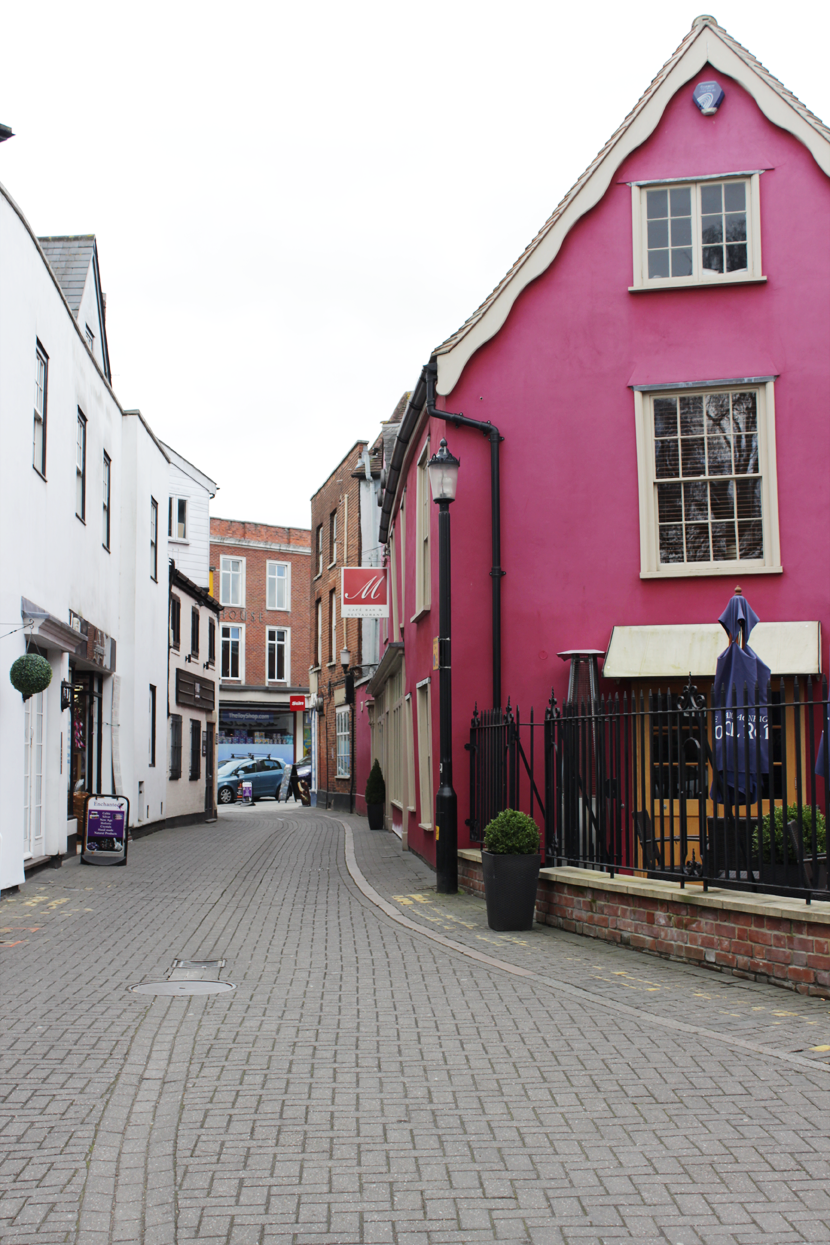 Speaking of cute houses… Colchester is one of the oldest recorded towns in Britain, and as such, there is a lot of history to be found. The castle is of course one obvious example, but it’s definitely not the only thing. Walking around the city centre there’s lots of cute little streets and old (and colourful!) houses to be found – such as the adorable pink one above. 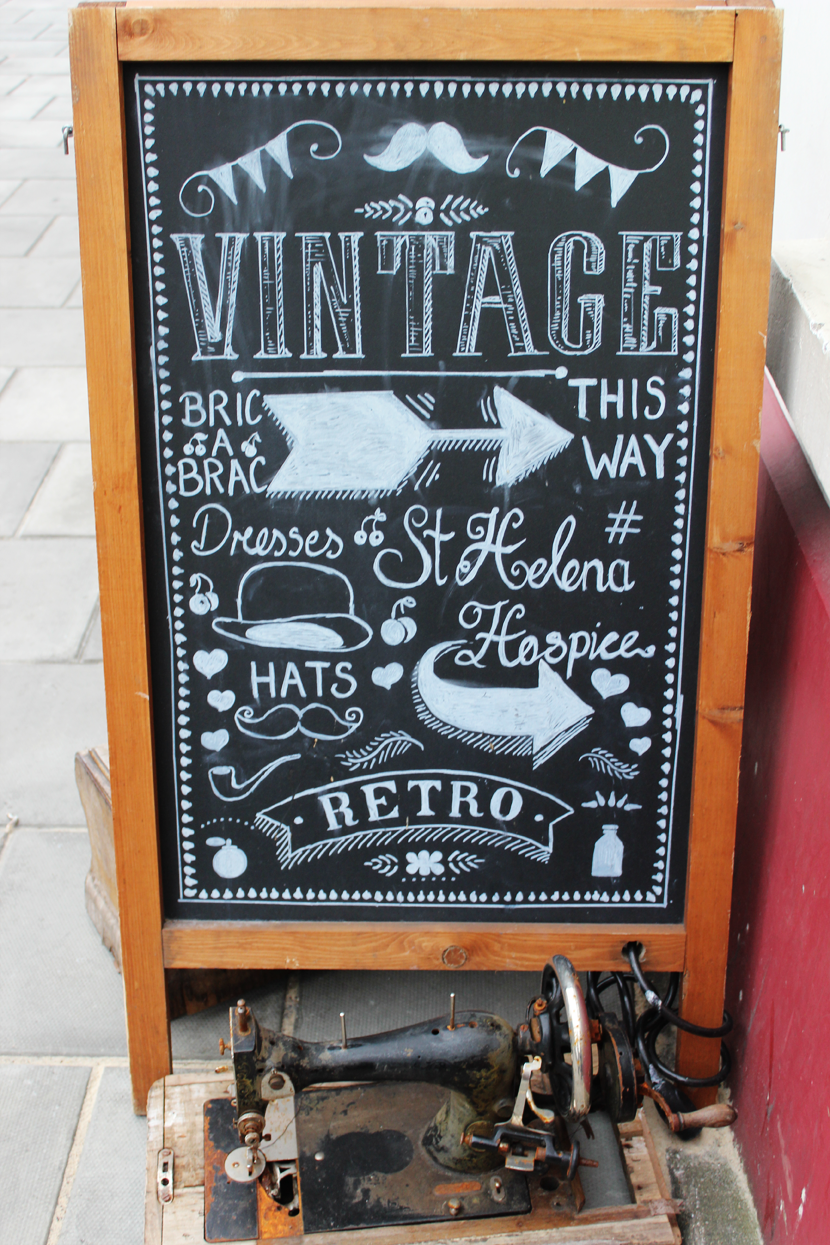 I was quite surprised to find so many vintage shops in Colchester – I wasn’t really expecting it to be like that if I’m honest! There were especially quite a few 50s/mod inspired shops which I quite liked, and even though some of them weren’t necessary second hand per se, they were definitely vintage inspired at least. The whole older part of town just felt very vintage inspired in general – they had old fashioned sweet shops, second hand stores and even a few tea rooms which always feel very much like an escape from reality.

(I feel like I have said the word “vintage” far too many times now and will need to be stopped.) 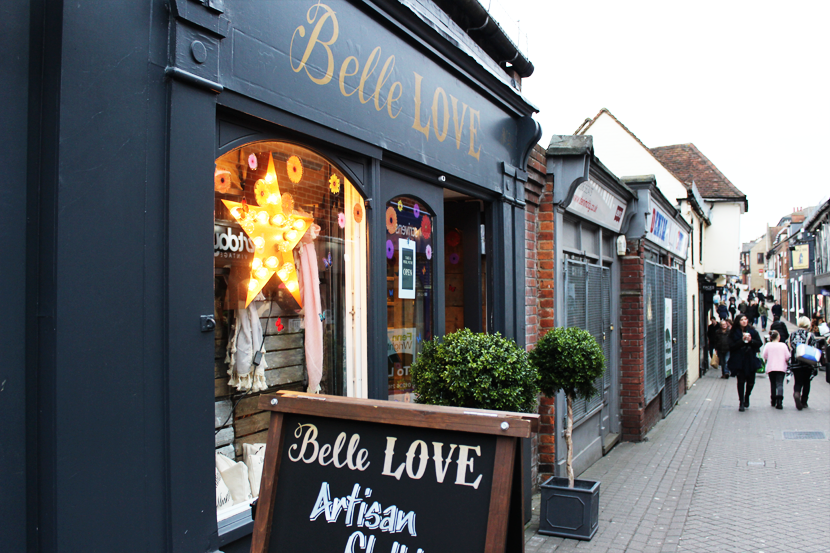 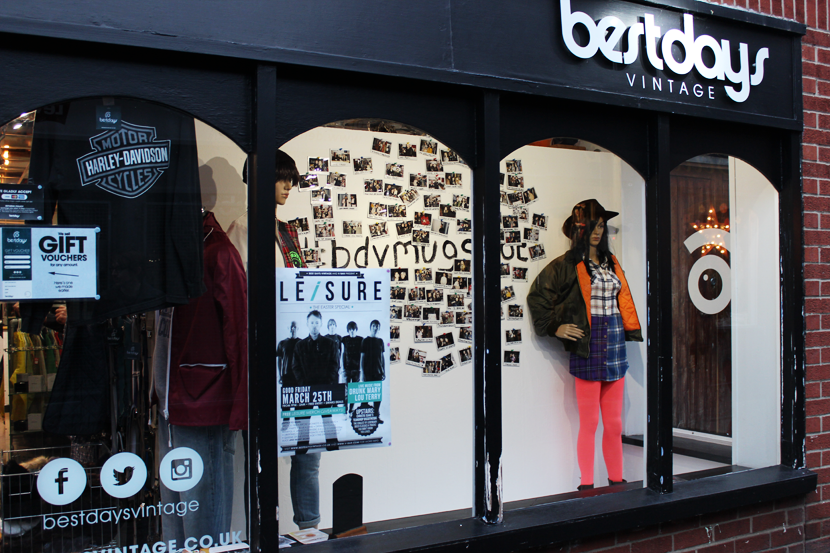 Next time I’m definitely going to plan ahead and go with a bigger budget as this time I had to leave the city feeling a little bit disappointed as I couldn’t really afford a shopping spree! I’m still dreaming of those amazing 40s and 50s dresses.. 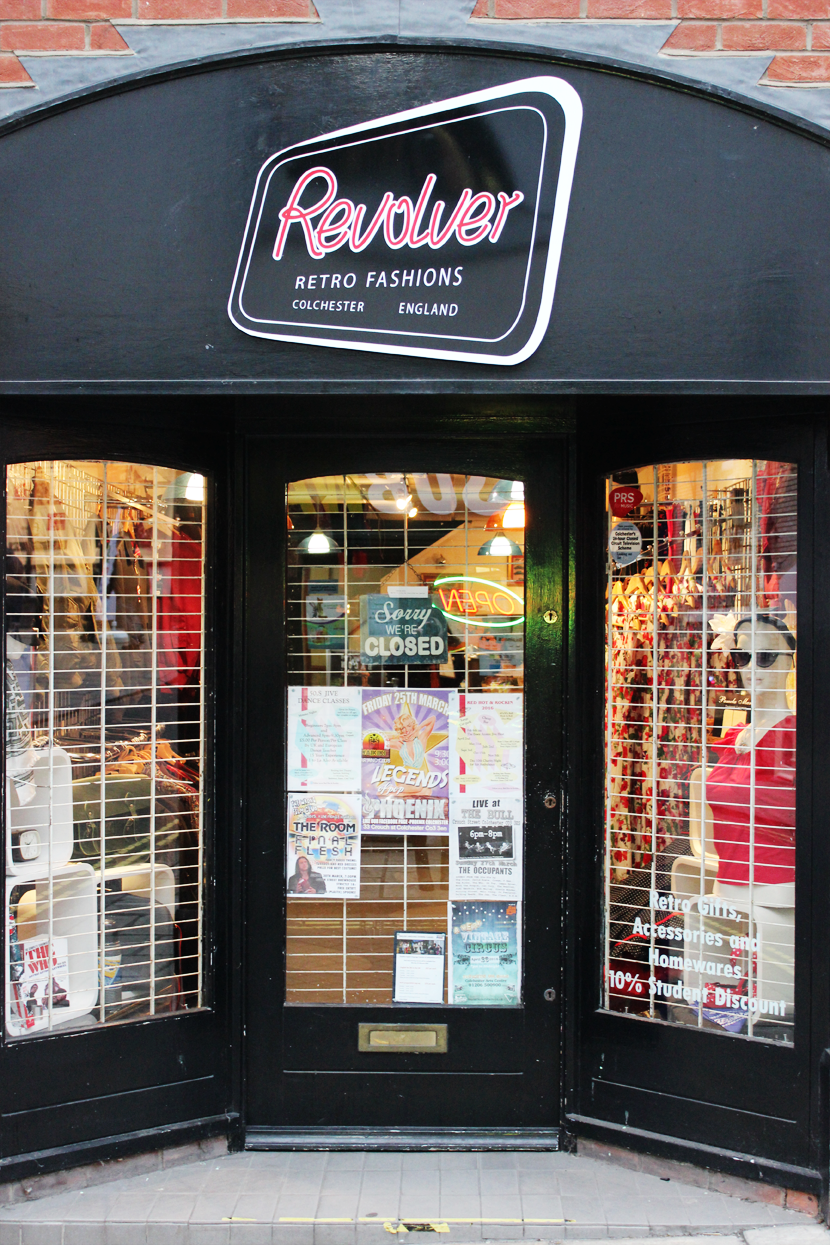 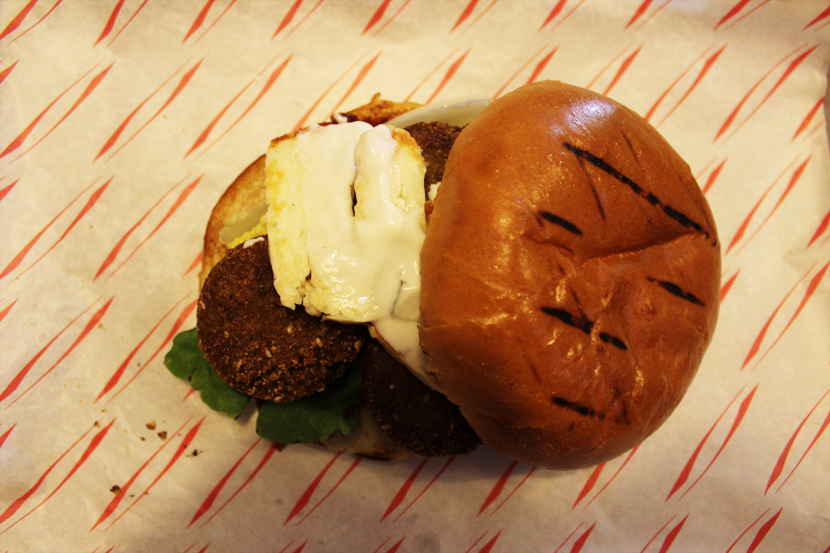 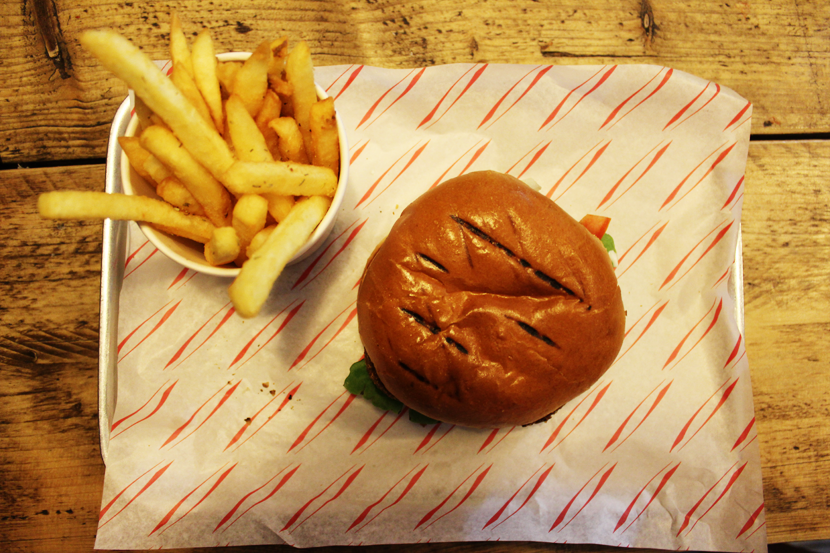 Mmm burgers.. Love Thy Burger lured me in with it’s quirky name, cleverly named burgers and that irresistible burger smell that I would get a whiff off every time we were walking to our hotel (this place was pretty much opposite us!).

I feel like this place is kind of in between a fast food joint and a sit down “gourmet burger” restaurant. It’s not quite Five Guys but then not quite GBK or Byron either – it’s somewhere in the middle! You order your food at the till and then go and wait for it to arrive to your table. I went for the falafel halloumi burger which aside from the falafel being a bit dry was pretty good value for money. I wouldn’t go as far as saying this would make it to my top 10 burgers list (yes, I eat a lot of burgers) but if you’re in Colchester and craving a decent burger, give this place a try. Some of the meat options sounded a lot nicer than my burger to be honest (I was definitely eyeing up the Mexican one..) and I wish there would have been more choice for us veggies too! 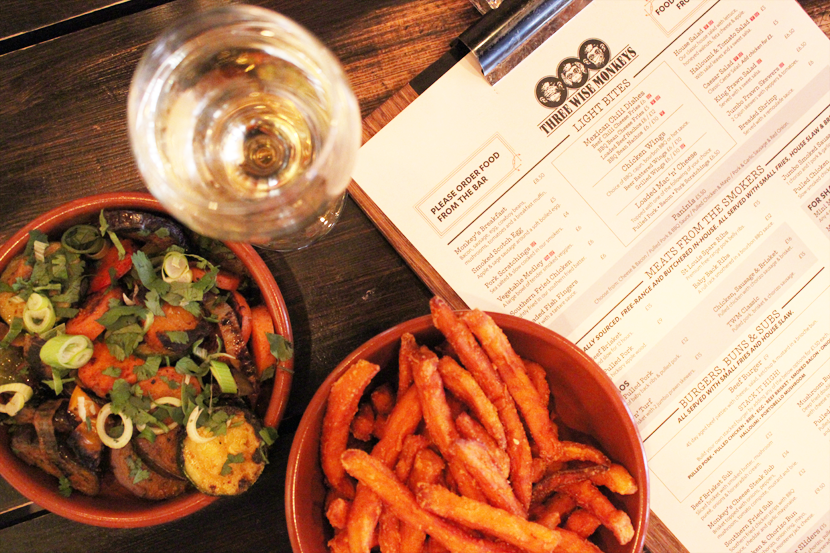 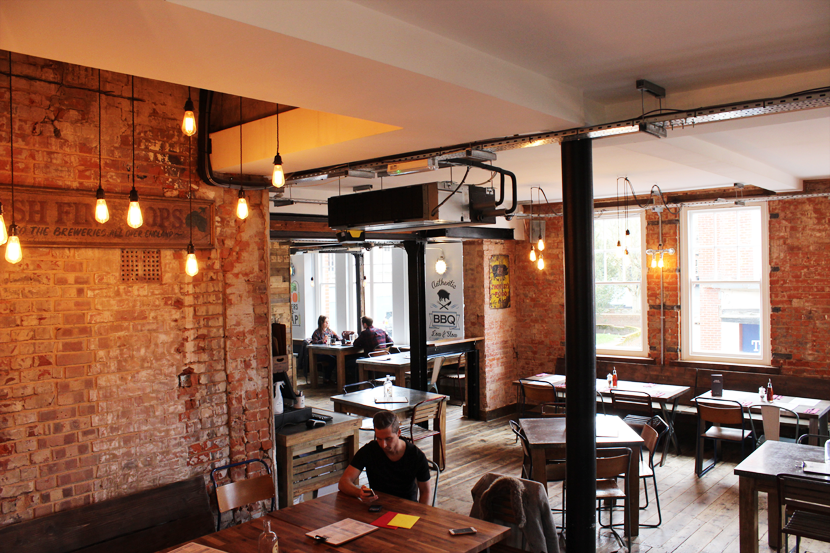 I feel like I’ve gone on and on about this place already more than enough, so instead of rambling on about it some more, I’m just gonna leave you a link to my main post about this little gem. 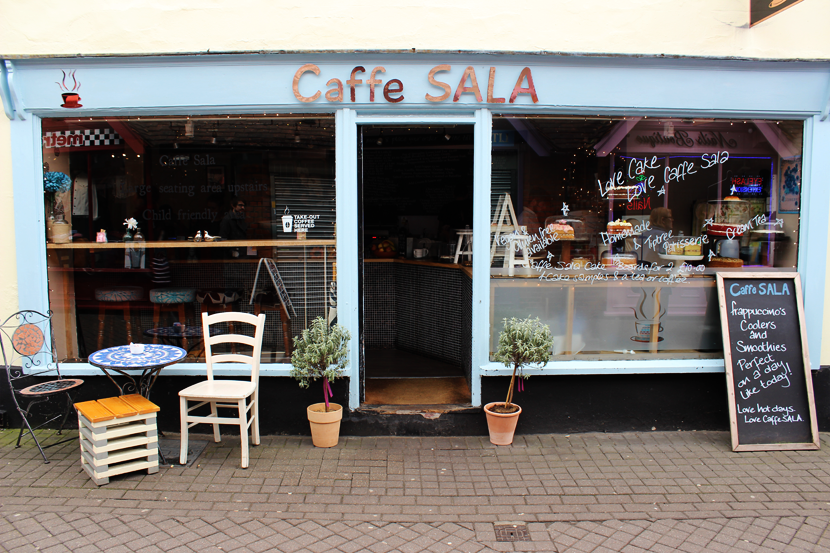 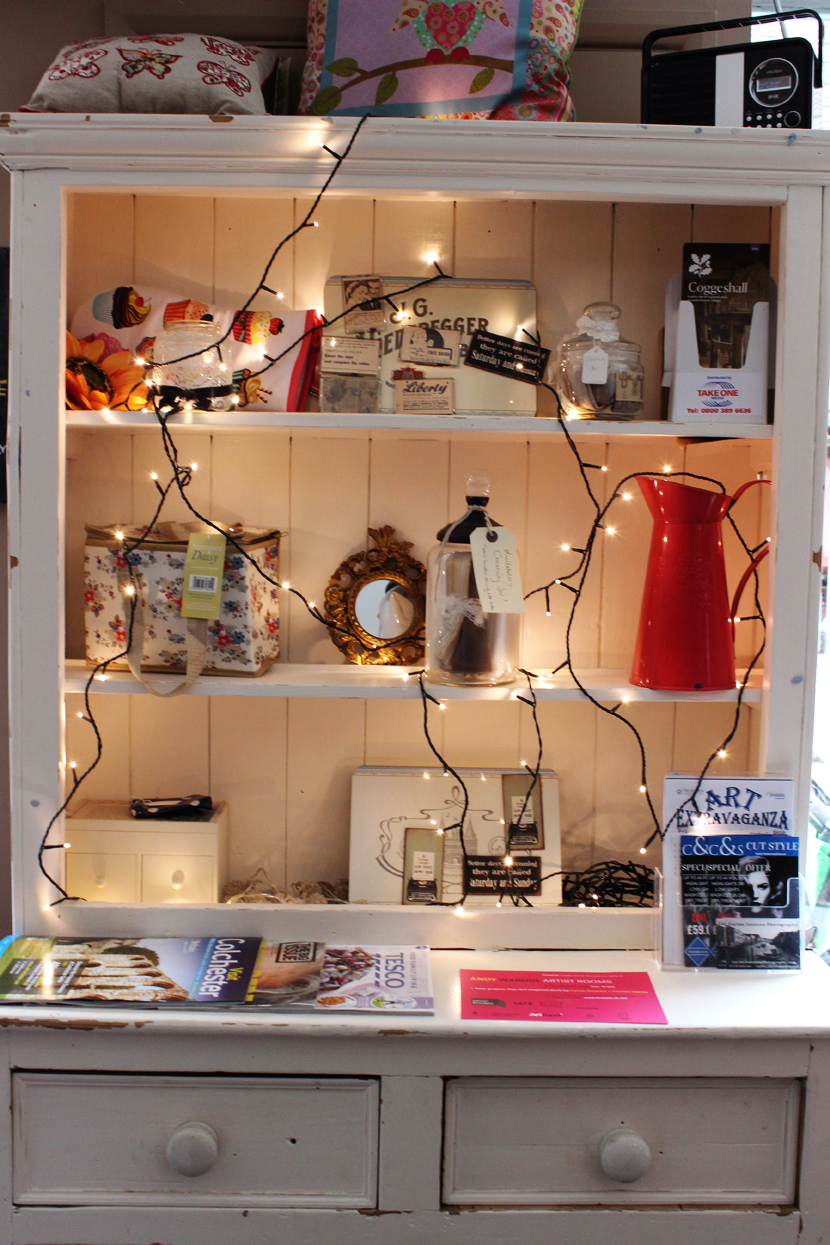 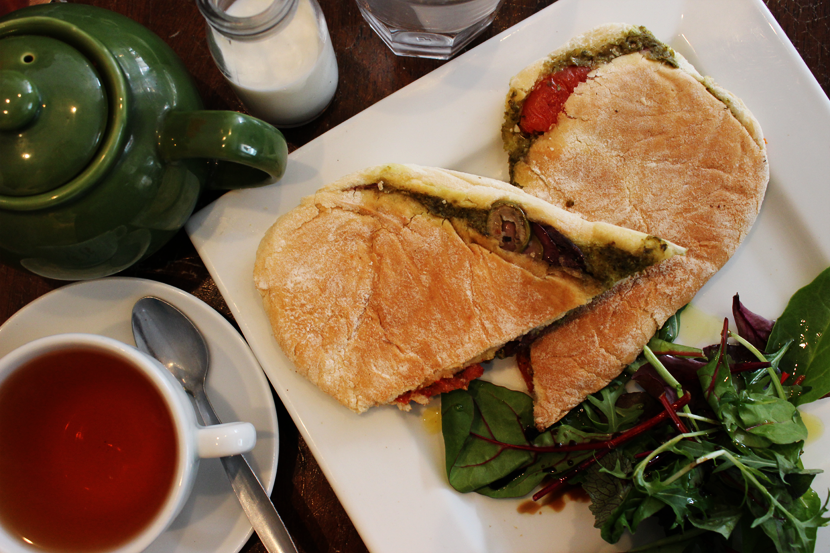 A really cute little cafe on Eld Lane doing sweet and savoury food – they even have a vegan menu and vegan cakes! I really wanted to try their cakes but as I was quite hungry I thought that a savoury option would probably be the wiser choice. I went with the pesto and sun dried tomato ciabatta which was really yummy and came with a little side salad as well. I was determined to try one of the cakes for dessert but as per usual I was so full from my main that I decided that to try and eat anything else would pretty much be a mission impossible. Long story short: a lovely little cafe and the next time I visit, I will definitely sample some of the cakes too! 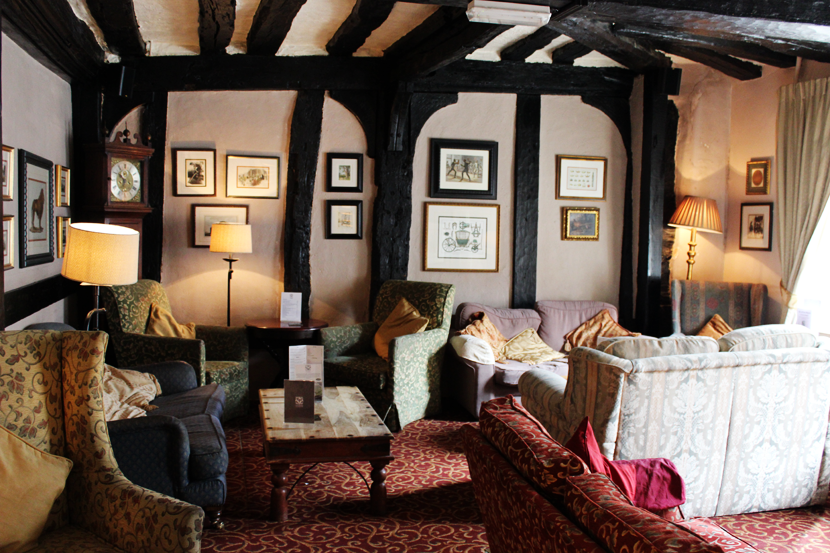 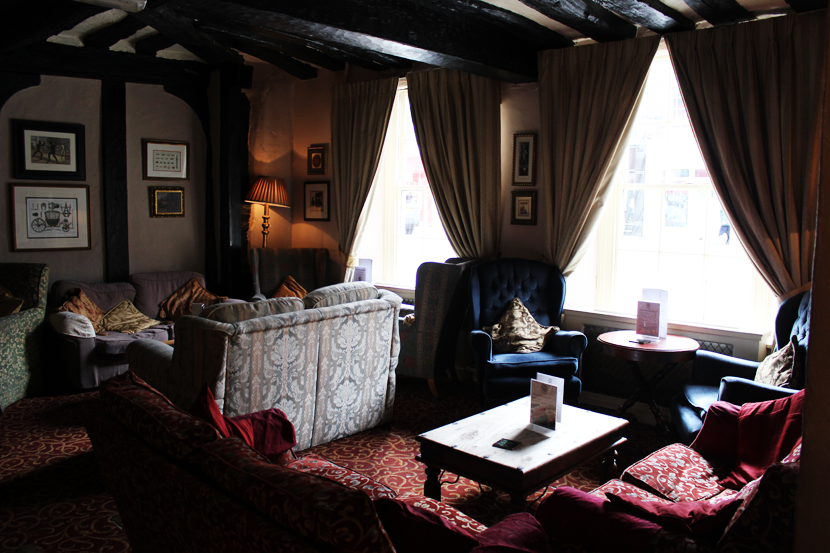 Really cute historical hotel right in the centre of the town. We booked our room from Hotels.com and thought it was really good value for money as the rooms were clean and spacious enough and most importantly: the breakfast was included in the room rate! I thought it was a lovely little hotel and pretty much perfect for our purposes as it was so close to everything and we only had 24 hours to spend in the city.

One thing I would say though: if you book a room here make sure to ask that they accommodate you to a room facing the backyard! Our windows were facing the High Street and as it was Saturday it was really noisy at night and I found it a little bit difficult to fall asleep. Other than that though I don’t have any complaints, and I loved the breakfast too – it was part buffet, part made to order (I went with the veggie full English and it was gooo-ood!). The hotel also has a really cute little lounge (see pictures above) which was the perfect place for a cheeky nightcap before going to bed.

Has anyone else been to Colchester, and if so, what did I miss?!

Eating out in London: The best restaurants…

Warning: Illegal string offset 'count' in /home/middleo3/public_html/wp-content/plugins/instagram-slider-widget/includes/class-wis_instagram_slider.php on line 774
No images found!
Try some other hashtag or username