I came back from Berlin two days ago and, to my disappointment, I didn’t end up having as many pictures as souvenirs as I would have liked to. It was raining a lot which meant we mostly hid inside cafes, restaurants and bars and so I didn’t get to snap as much as I perhaps thought I would. I didn’t even get to take pictures of all of the food I ate (tragic!) but as I did manage to photograph about half of them, I thought I’d put together a sort of guide to a few foodie spots I loved in Berlin.

(Useful) tip: Book, book, book! We were very lucky because we managed to get tables in places that were really full (the people that came after us were turned away on two separate occasions!), but we also missed out on one breakfast spot we wanted to visit because they didn’t have any space. Berlin is full of lovely restaurants, and they are there for a reason – Berliners love dining out. So yes, whenever you can, I would recommend trying to book a table – especially on weekends. 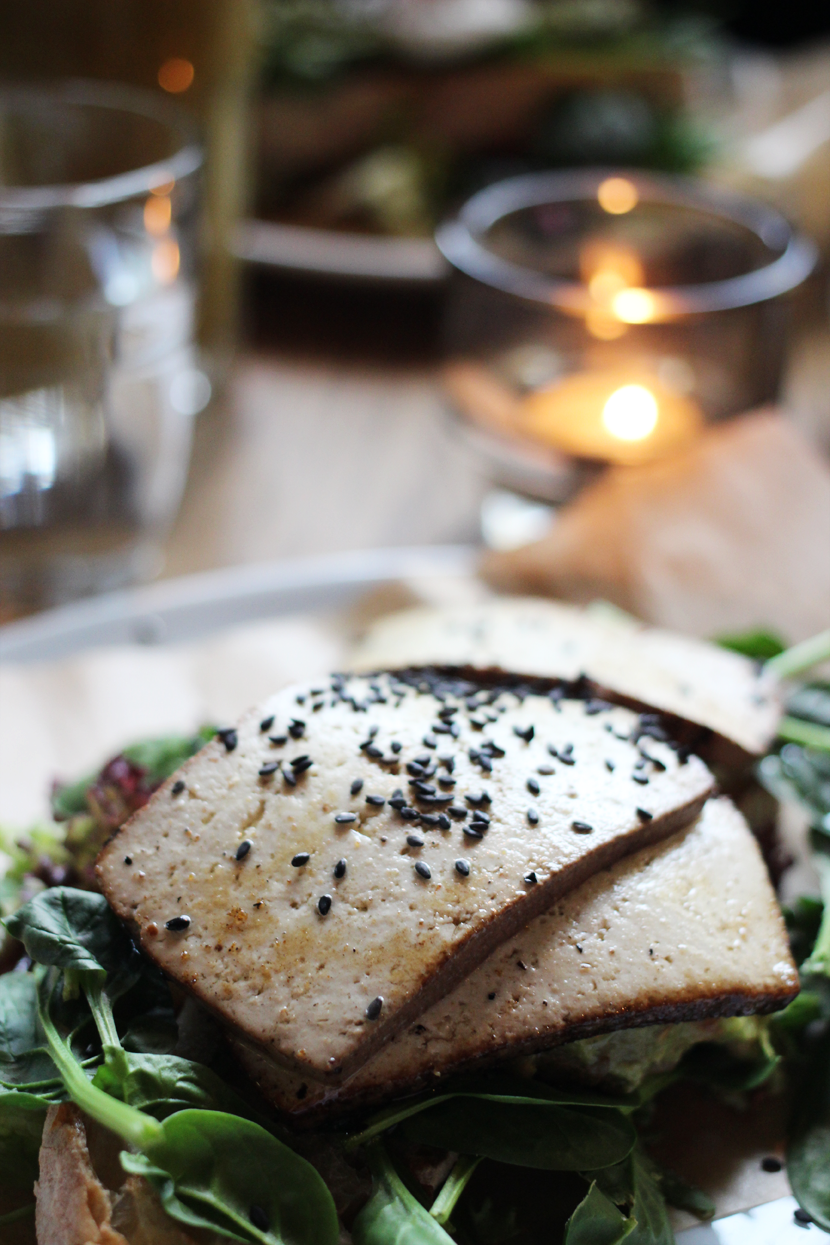 Spreegold is a small chain of restaurants serving everything from breakfast to dinner, and they cover all those bases very thoroughly. They have a massive breakfast menu with egg dishes, sweet options, breakfast “stacks” and so much more. They also have a long list of drinks with juices and smoothies as well as the more traditional hot drinks such as the lovely fresh mint tea that I went for.

Me and my friend both went for a breakfast stack – she for the avocado one with a poached egg and me for the vegan option with slices of smoky tofu with sesame seeds & lovely, mushy avocado. I think it’s safe to say we both really enjoyed our breakfasts, and I was actually very pleasantly surprised with mine as I’m not always the biggest fan of tofu. Here it somehow worked really well and I would happily recommend it – although be warned that the avocado is more like guacamole, so if that’s too much for you in the morning, maybe try out one of their other (many) options!

This is the one place that we stumbled on to pretty much randomly. Our plan was to visit another breakfast spot close by, but as it was completely full (hence my warning above!) we started wandering the nearby streets of Prentzlauer Berg and in the end found this lovely little gem.

Allan’s Breakfast Club (or ABC for short) is a brunch spot, a restaurant and a wine bar run by a Frenchman called – unsurprisingly – Allan. The brunch menu is very extensive, ranging from the classics like Eggs Benedict to more exotic dishes such as Shakshuka, which is what I went for (and loved). The food was really lovely, the portions very generous and the service super friendly and efficient. Much recommended!

This was the first place we visited after I’d arrived and oh my, what a place to start! Transit is a Southeast Asian restaurant, and the idea is to choose 2-3 little dishes and then share (or greedily keep them to yourselves as we did..!) with your friends. All except two of the dishes can be ordered with tofu which makes this place very vegetarian friendly too.

I had a green curry which was one of the best ones I’ve had in a very long time, and a yellow curry with sweet potato which was really lovely too – just the right amount of sweet! I only had two dishes and a one portion of rice and I’d say it was definitely enough, unless you really are monstrously hungry!

This was possibly one of my absolute favourites of the whole trip, but also one of the biggest disappointments. It was a favourite because the food was ridiculously good, but a disappointment because as we visited on a Sunday evening they had ran out of pretty much everything. We would’ve wanted to order a bit more after we’d finished our sharing platter, but they had absolutely nothing left. I just wanted to leave that here as a bit of a warning in case you’re interested in visiting (which you absolutely should!) – maybe go during Friday or Saturday instead, and again, remember to book because this place seemed really popular too, even on a Sunday night.

As they didn’t have the things we originally wanted to order, we went with the Sambusak (I think that’s what it was called, anyway!) which was recommended to us by our lovely waitress. It was basically a big pastry full of veggies and mushrooms on a bed of hummus and a lovely side salad. I probably wouldn’t have picked it from the menu on my own, but I’m so glad it was recommended to us because I absolutely loved it. I can’t wait to go back to Berlin and try out their other dishes too – there’s so much I still want to try!

Kimchi Princess is a very atmospheric restaurant in the up and coming (or so I’m told!) Kreutzberg area serving Korean food ranging from bibimpaps to big Korean BBQ sharing platters. My friend actually wanted to go there for the latter, but turns out they only do the BBQ section of the menu after 5pm and because we met up for lunch this was not an option for us. However, she said that the platters are incredibly good, so if you do end up here during the evening, maybe try them out! They also have vegan BBQ platter which is pretty amazing.

We both had bibimbaps for lunch in the end – my friend the beef one and I the vegan one which came with tofu. The bibimbap is served in a sizzling dish where the food stays hot the entire time and is still cooking when it’s brought to you. It’s served with a miso soup which you’re meant to pour into the bibimbap if it gets too dry or too spicy. You wouldn’t think a soup would go well with a spicy rice dish, but they were a surprisingly good combination! I’d love to go back and try out their other dishes too – maybe in the evening so I can sample the vegan BBQ as it sounds very tempting.

I couldn’t end this post without a dessert recommendation, could I?! I know I’ve mentioned before that I’m not the biggest dessert person in the world, but I have to say that waffles are definitely one of the exceptions to this rule. Kauf Dich Glücklich is a lovely and cosy cafe/bar/shop serving both savoury and sweet waffles, as well as hot drinks and COCKTAILS!

The waffle was really good, and the one I had was actually vegan too – win win! They had about 5-6 vegan options, from which I chose the maple syrup one – of course – and then had a lovely rum cocktail to accompany it. Aside from the vegan options they had so many other choices too – there was literally (yes, actually literally) a whole blackboard full of them. One thing I would say though is that the portions are absolutely HUGE, so if possible, it might be a good idea to share – especially if you’re already a bit full and have a tendency to feel ill from too much sugar. If not, however, just go for a full one – you definitely deserve it after all that walking around in a new city..!

My guide to meal planning: The how…

PREVIOUS POST
"3 weekend escapes from London"
NEXT POST
"3 books about London"
No images found!
Try some other hashtag or username